Asimov's Chronology of Science and Discovery is a really fun and strange book. I don’t know that I would recommend reading it per se, but it’s a great book to skim. It's been one of my sources for the series I have coming up on very-long-run history, and I thought it'd be fun to read a little about it.

It is a chronological list of scientific advances and other inventions, starting with "bipedality" in 4,000,000 BC and ending with things like "warm superconductivity" in the late 1980s. Asimov (yes, that Asimov), getting his knowledge from I have no idea where (Google didn't exist!), describes each one in simple, direct, matter-of-fact, layperson-friendly language and tries to give a sense of how people thought of it and why it mattered.

It's easiest to give a feel for this book with a sample page: 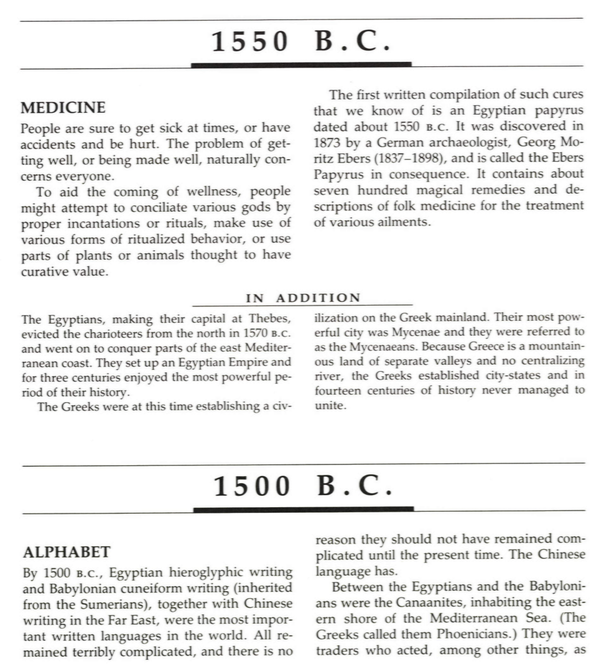 If you’re patient and abstract-minded enough, the book feels like reading a story. A story that seems like an okay candidate for “most important story ever.”

The other thing I really liked about this book was its implicit conviction that all of these scientific advances can be explained, visualized, and made to basically make sense. After reading it (really, by the time I'd read the first ~50% of it), I felt like I could somehow intuitively, vaguely imagine how we've made most of these advances. I would describe most of them as some combination of:

This book has made me generally more interested in trying to understand the high-level explanations for how all the magic of the modern world came to be.

There are enough "In addition" sections that you can see what was going on more broadly in the world at the same time.

Weaknesses of this book/reasons not to read it:

This book is especially strong for understanding relatively early (pre-1800, maybe pre-1900) history. After that, things get complex enough that I found myself going back through the book and stitching together entries in order to tell cohesive stories of some big developments like the discovery of metallurgy, the development of glass -> spectacles -> microscopes and telescopes, the path to Newton's laws, and the discovery of electormagnetism (culminating in Maxwell's equations, the Newton's laws of electromagnetism). My notes on that are here.

Asimov has written a terrifying number of other nonfiction books - science, history, a guide to Shakespeare, a guide to the Bible. One of his books, Asimov's Guide to Science, appears to be the same exact book as the one discussed here, just in a different order (by topic instead of chronological).