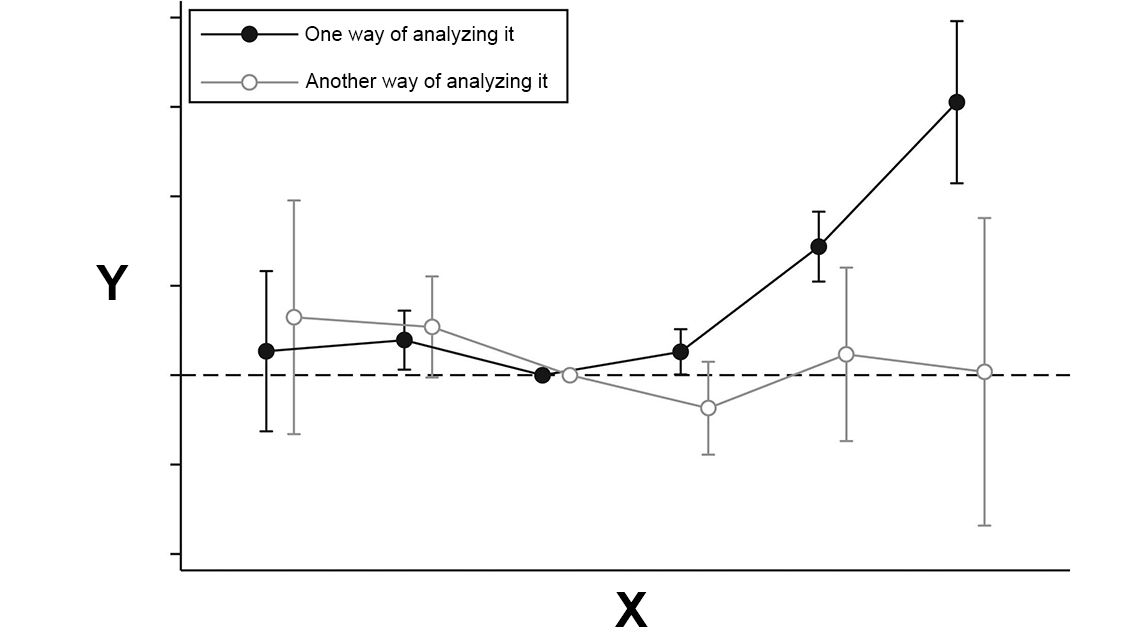 There's an interesting theory out there that X causes Y. If this were true, it would be pretty important. So I did a deep-dive into the academic literature on whether X causes Y. Here's what I found.

(Embarrassingly, I can't actually remember what X and Y are. I think maybe X was enriched preschool, or just school itself, or eating fish while pregnant, or the Paleo diet, or lead exposure, or a clever "nudge" policy trying to get people to save more, or some self-help technique, or some micronutrient or public health intervention, or democracy, or free trade, or some approach to intellectual property law. And Y was ... lifetime earnings, or risk of ADHD diagnosis, or IQ in adulthood, or weight loss, or violent crime, or peaceful foreign policy, or GDP per capita, or innovation. Sorry about that! Hope you enjoy the post anyway! Fortunately, I think what I'm about to write is correct for pretty much any (X,Y) from those sorts of lists.)

The chaff: lots of unhelpful studies that I'm disregarding

First, the good news: there are hundreds of studies on whether X causes Y. The bad news? We need to throw most of them out.

Many have comically small sample sizes (like studying 20 people) and/or comically short time horizons (like looking at weight loss over two weeks),1 or unhelpful outcome measures (like intelligence tests in children under 5).2 But by far the most common problem is that most of the studies on whether X causes Y are simple observational studies: they essentially just find that people/countries with more X also have more Y.

Why is this a problem? There could be a confounder - some third thing, Z, that is correlated with both X and Y. And there are specific reasons we should expect confounders to be common:

Now, a lot of these studies try to "control for" the problem I just stated - they say things like "We examined the effect of X and Y, while controlling for Z [e.g., how wealthy or educated the people/countries/whatever are]." How do they do this? The short answer is, well, hm, jeez. Well you see, to simplify matters a bit, just try to imagine ... uh ... shit. Uh. The only high-level way I can put this is:

I don't think we can trust these papers, and to really pick them all apart (given how many there are) would take too much time. So let's focus on a smaller number of better studies.

Digging through the sea of unhelpful studies, I found 1-5 of them that are actually really interesting!

For example, one study examines some strange historical event you've never heard of (perhaps a surge in Cuban emigration triggered by Fidel Castro suddenly allowing it, or John Rockefeller's decision to fund a hookworm eradication campaign, or a sudden collective pardon leading to release of a third of prison inmates in Italy), where for abstruse and idiosyncratic reasons, X got distributed in what seems to be almost a random way. This study is really clever, and the authors were incredibly thorough in examining seemingly every way their results could have been wrong. They conclude that X causes Y!

But on closer inspection, I have a bunch of reservations. For example:

I found 0-4 other interesting studies. I can't remember all of the details, but they may have included:

Compounding the problem, the 1-5 studies I found tell very different stories about the relationship between X and Y. How could this make sense? Is there a unified theory that can reconcile all the results?

I have to say, this all was simultaneously more fascinating and less informative than I expected it would be going in. I thought I would find some nice studies about the relationship between X and Y and be done. Instead, I've learned a ton about weird historical events and about the ins and outs of different measures of X and Y, but I feel just super confused about whether X causes Y.

I guess my bottom line is that X does cause Y, because it intuitively seems like it would.

I'm glad I did all this research, though. It's good to know that social science research can go haywire in all kinds of strange ways. And it's good to know that despite the confident proclamations of pro- and anti-X people, it's legitimately just super unclear whether X causes Y.

I mean, how else could I have learned that?

Appendix: based on a true story

This piece was inspired by:

The basic patterns above apply to most of these, and the bottom line usually has the kind of frustrating ambiguity seen in this conclusion.

There are cases where things seem a bit less ambiguous and the bottom line seems clearer. Speaking broadly, I think the main things that contribute to this are: