~44% of people think they'd continue working in their current job if they won $10 million in the lottery. At the same link: people estimate that they waste an average of an hour a day at work, and that people at their workplace are closer to wasing 1.5 hrs (as of 2007)

Environment: People rank environmental issues highly and even say that the environment should be prioritized above economic growth: 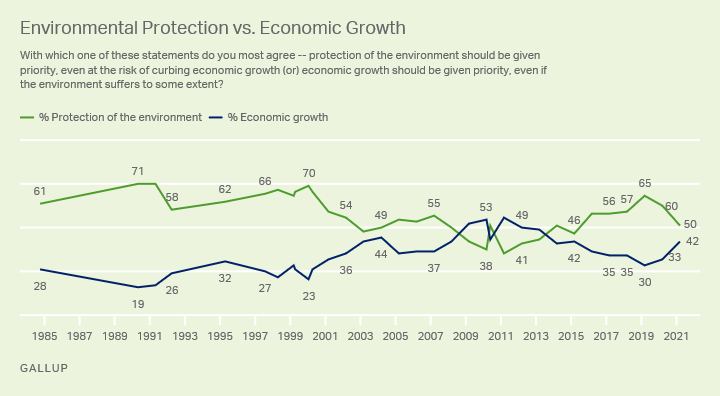 More Americans think we spend too much on the military as opposed to too little.

~13% never used the Internet, as of 2013 - see "Do you, personally, use the internet at your home, place of work or school? That could be through a computer, smartphone, tablet or other device").

~40% of Americans are straight-up Creationists.

What percentage of people think the taxes they're paying are too high vs. about right? Surprisingly (to me), it's roughly a draw. That's a recent thing.

Trust in media fell a lot between the 1970s and 2010s, though it's been surprisingly stable since then.

~60% believe that cloning animals would be morally wrong.

~50% say religion is "very important" in their life (I was surprised at how low this is, especially given that nearly half believe in creationism). However, large %'s of people (60-70%) believe in heaven, hell, angels, the Devil.

Football has been (a lot) more popular than baseball for at least 35 years. Baseball and basketball were even as of 2008 (most recent).

Americans would like to see big business have less influence, but are even more worried (by a lot, 67%-26%) about big government (see "In your opinion, which of the following will be the biggest threat to the country in the future -- big business, big labor or big government?")

Here's a chart of public opinion toward each industry. It's pretty much what you'd expect.

Death Penalty: ~60% of Americans were in favor as of around 2010, even though a majority thought it had claimed innocent victims in the last 5 yrs (the figure was 59% as of the last measurement in 2009), and 64% thought it was ineffective as a deterrent. (As of 2020 the % in favor of the death penalty is a little lower, 55%; the other two figures I just cited haven't been updated.)

~40% of Americans personally own a gun.

The most admired man and woman of each year going back several decades (3rd table down). Mostly just Presidents and First Ladies.

~5% of Americans are vegetarian, 3% vegan. And again, ~40% personally own a gun. If you had any remaining doubts that your friends are not normal.

At a given point in time, Americans consistently think they are worse off than a year ago, but will be better off in a year.

21% of Americans say they have a physical disability that limits their activity (as of 2004, the last data point).

LGBT rights. Very big moves in the right directions, but as of May 2021 18% still think that "gay or lesbian relations between consenting adults should not be legal." (This number is falling pretty fast though.)

~80% are satisfied with the way their lives are going. Has been fairly stable over time. By contrast, satisfaction with how things are going in the U.S. is pretty volatile.