This post will introduce my basic approach to asking the question "Has life gotten better?" and apply it to the easiest-to-assess period: the industrial era of the last few hundred years.

My conclusion for this period is quite in line with that of Enlightenment Now:1 life has gotten better, for humans (not for animals), especially for countries that are now considered "developed" (including the US and most of Europe).

Future posts will discuss trends in quality of life from longer ago. This image illustrates how this post fits into the full "Has Life Gotten Better?" series: 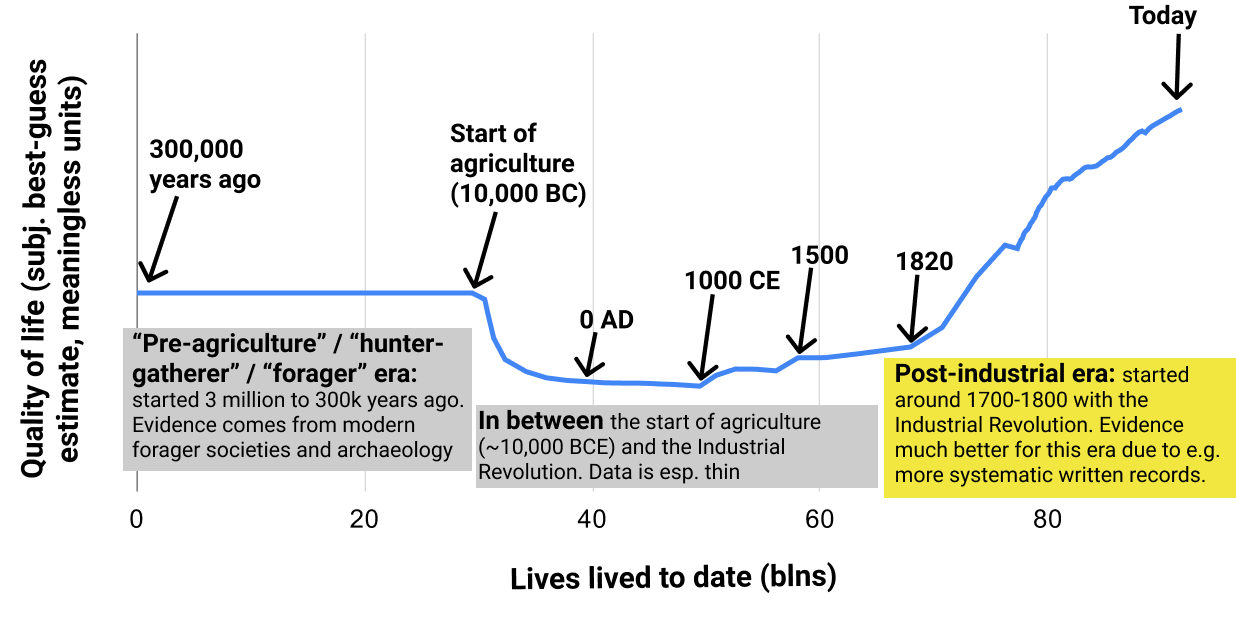 (Reading this post isn't necessary for reading the rest of the series.)

First, as far as I'm aware, there's no "official" or academic review for how quality of life has evolved for the average person over the course of human history. To get a good guess at the answer to "has life gotten better?", it's necessary to assemble evidence and arguments oneself (especially when talking about earlier time periods; there are a number of books about how quality of life has evolved over the last couple hundred years).

My attempt to answer this question has generally focused on systematically collected data. This means, essentially, that someone applied one consistent set of rules to scoring different periods of time on some metric. I often draw on Our World in Data, which seems to aspire to collect and present as much of this sort of data as possible, and tends to be very clear and detailed about where its data is coming from.

When asking "Has life gotten better?", there is lots of evidence you could consider that doesn't fit this description. You could pore over depictions of different eras written by historians; you could review journals and diaries; you could reason about what life probably was like based on e.g. intuitions about how TV and the Internet make you feel today. My problem with this kind of analysis is that:

Focusing on systematic data leaves out a lot - in fact, for most eras it leaves out some of the most fundamentally important questions, like "How happy were people?" and "How was mental health?" But I can gather and look at all of the data that's relevant and available, and readers can check my work, and we can know that we're all looking at the same non-cherry-picked sample of evidence, and trying to make an uncertain best guess based on what we know (which is of course subject to change if more information comes in).

To date, I haven't seen any other analysis that seems to give a strong case against the basic conclusion I've arrived at this way.

What does it mean for human life to get "better" or "worse?"

I didn't try to reduce quality of life to "happiness" or something like that, for a number of reasons, primarily that (a) this would've required taking controversial philosophical stands;2 (b) data on "happiness" is generally very limited (especially when looking over longer periods of time), and I wanted to be able to draw on as much data as possible.

Instead, I made a list of a number of things that seem relevant for quality of life, and are at least potentially "measurable" by systematic data (at least to some degree).

Here's my list, which I made by brainstorming while reviewing a few sources for inspiration:3

Questions that are particularly amenable to measurement

Questions that are somewhat amenable to measurement

I went through all the charts on Our World in Data, flagging the ones that seemed most useful for getting a handle on how the above things have changed over time (ideally long periods of time). (I also included some comparisons between richer and poorer countries, and would generally assume the world has become more like richer countries over time.) My list of relevant charts, with start dates, is here. After doing this, I went through Enlightenment Now for things I may have missed; this resulted in adding two more charts from Our World in Data and a couple of other notes to the summary table below.4

Personally, I would guess that the last three rows - particularly romantic relationship quality and job satisfaction - would also show improvement, at least in richer countries, if we had good data on them.

I expect others have different impressions. But I think it's telling that nearly everything we can measure seems to have improved (and when not, stayed flat) over the last couple hundred years.

With that in mind, I tend to default to interpreting most statements like "Alienation, depression, loss of meaning, etc. are modern-world-specific phenomena" as more-or-less just "grass is greener" thinking. I think any given past era probably had lots of people struggling with a lack of meaning, fulfillment, purpose, and/or good relationships, even if their community was pressuring them to go along with some official consensus that X or Y is meaningful and fulfilling.

(The flatness of suicide rates over time seems indicative here.)

For animals, it's not the same story

Unfortunately, the chart for average animal quality of life probably looks very different from the human one; for example, the rise of factory farming in the 20th and 21st centuries is a massive negative development. I consider this a major complicating point for the narrative about life getting better over this period.