As part of exploring trends in quality of life over the very long run, I've been trying to understand how good life was during the "pre-agriculture" (or "hunter-gatherer"1) period of human history. We have little information about this period, but it lasted hundreds of thousands of years (or more), compared to a mere ~10,000 years post-agriculture.

(For this post, it's not too important exactly what agriculture means. But it roughly refers to being able to domesticate plants and livestock, rather than living only off of existing resources in an area. Agriculture is what first allowed large populations to stay in one area indefinitely, and is generally believed to be crucial to the development of much of what we think of as "civilization."2)

There are arguments floating around implying that the hunter-gatherer/pre-agriculture period was a sort of "paradise" in which humans lived in an egalitarian state of nature - and that agriculture was a pernicious technology that brought on more crowded, complex societies, which humans still haven't really "adapted" to. If that's true, it could mean that "progress" has left us worse off over the long run, even if trends over the last few hundred years have been positive.

A future post will comprehensively examine this "pre-agriculture paradise" idea. For now, I just want to focus on one aspect: gender relations. This has been one of the more complex and confusing aspects to learn about. My current impression is that:

Based on the latter points, it seems that there are people trying hard to make the case for gender equality among hunter-gatherers, but not having much to back up this case. One reason for this might be a fear that if people think gender inequality is "ancient" or "natural," they might conclude that it is also "good" and not to be changed. So for the avoidance of doubt: my general perspective is that the "state of nature" is bad compared to today's world. When I say that pre-agricultural societies probably had disappointingly low levels of gender equality, I'm not saying that this inequality is inevitable or "something we should live with" - just the opposite.

The best source on pre-agriculture gender relations I've found is Hayden, Deal, Cannon and Casey (1986): "Ecological Determinants of Women's Status Among Hunter/Gatherers." I discuss how I found it, and why I consider it the best source I've found, here.

It is a paper collecting ethnographic data: data from anthropologists' observations of the relatively few people who maintain or maintained a "forager"/"hunter-gatherer" (nonagricultural) lifestyle in modern times. It presents a table of 33 different societies, scored on 13 different properties such as whether a given society has "female voice in domestic decisions" and "possibility of female leaders."

Here's the key table from the paper, with some additional color-coding that I've added (spreadsheet here):

From this table, it seems that:

Overall, I would characterize this general picture as one of bad gender relations: it looks as though most of these societies have rules and/or norms that aggressively and categorically limit women's influence and activities.

I got a similar picture from the chapter on gender relations from The Lifeways of Hunter-Gatherers (more here on why I emphasize this source).

I think there are a fair number of people and papers floating around that are aiming to give an impression that pre-agriculture gender relations were highly egalitarian.

In fact, when I started this investigation, I initially thought that gender equality was the consensus view, because both Google searches and Wikipedia content gave this impression. Not only do both emphasize gender equality among foragers/hunter-gatherers, but neither presents this as a two-sided debate.

Below, I'll go through what I found by following citations from (a) the Wikipedia "hunter-gatherer" page; (b) the front page from searching Google for "hunter-gatherer gender relations." I'm not surprised that Google and Wikipedia are imperfect here, but I found it somewhat remarkable how consistently the "initial impression" given was of strong gender equality, and how consistently this impression was unsupported by sources. I think it gives a good feel for the broader phenomenon of "unsupported claims about gender equality floating around."

Nearly all African hunter-gatherers are egalitarian, with women roughly as influential and powerful as men.[22][23][24] ... In addition to social and economic equality in hunter-gatherer societies, there is often, though not always, relative gender equality as well.[30]

The citations given don't seem to support this statement. Details follow (I look at notes 22, 23, 24, and 30 - all of the notes from the above quote) - you can skip to the next section if you aren't interested in these details, but I found it somewhat striking and worth sharing just how bad the situation seems to be here.

Note 22 refers to a chapter ("Gender relations in hunter-gatherer societies") in this book. I found it to have a combination of:

Very broad claims about gender equality, which I consider less trustworthy than the sort of systematic, specifics-based analysis above. Key quote:

Various anthropologists who have done fieldwork with hunter-gatherers have described gender relations in at least some foraging societies as symmetrical, complementary, nonhierarchical, or egalitarian. Turnbull writes of the Mbuti: “A woman is in no way the social inferior of a man” (1965:271). Draper notes that “the !Kung society may be the least sexist of any we have experienced” (1975:77), and Lee describes the !Kung (now known as Ju/’hoansi) as “fiercely egalitarian” (1979:244). Estioko-Griffin and Griffin report: “Agta women are equal to men” (1981:140). Batek men and women are free to decide their own movements, activities, and relationships, and neither gender holds an economic, religious, or social advantage over the other (K. L. Endicott 1979, 1981, 1992, K. M. Endicott 1979). Gardner reports that Paliyans value individual autonomy and economic self-sufficiency, and “seem to carry egalitarianism, common to so many simple societies, to an extreme” (1972:405).

Of the five societies named, two (Batek, Paliyan) are not included in the table above; two (!Kung, Agta) are among the most egalitarian according to the table above (although the !Kung are listed as having female hunting taboos); and one (Mbuti) is listed as having "ritual exclusion of females" and no "possibility of female leaders." I trust specific claims like the latter more than broader claims like "A woman is in no way the social inferior of a man."

I actually wrote that before noticing, in the next section, that the same author who says "A woman is in no way the social inferior of a man" also observes that "a certain amount of wife-beating is considered good, and the wife is expected to fight back" - of the same society!

Seeming concessions of significant inequality, sometimes accompanied by defenses of this that I find bizarre. Some example quotes from the chapter:

Overall, this chapter actively reinforced my impression that gender equality among the relevant societies is disappointingly low on the whole.

I think the idea is that these findings undermine the idea that women couldn't be big-game hunters.

I have many objections to this paper being one of three sources cited for the claim "Nearly all African hunter-gatherers are egalitarian, with women roughly as influential and powerful as men."

Note 23 goes to a New York Times article that is mostly about the above paper. It also cites a case where remains were found of a man and woman buried together near servants; I do not know what point that is making.

Source 30 appears to primarily be drawing from "Women's Status in Egalitarian Society," a chapter from this book.5

I find this chapter extremely unconvincing, and reminiscent of Source 22 above, in that it combines (a) sweeping statements without specifics or citations; (b) scattered statements about individual societies; (c) acknowledgements of what sound to me like disappointingly low levels of gender equality, accompanied by bizarre defenses. (One key quote, which sounds to me like it's basically arguing "Gender relations were good because women had high status due to their role in childbearing," is in a footnote.6) 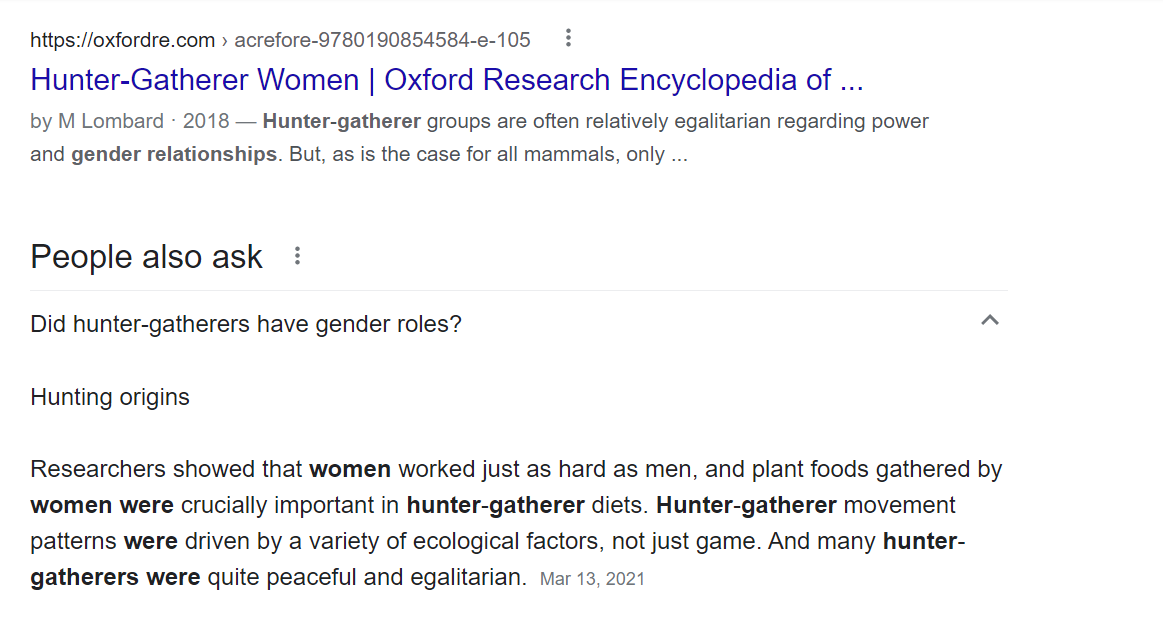 However, when I clicked through to the first result, I found that the statement highlighted by Google ("Hunter-gatherer groups are often relatively egalitarian regarding power and gender relationships") appears to be an aside: no citation or evidence is given, and it is not the main topic of the paper. Most of the paper discusses the differing activities of men and women (e.g., big-game hunting vs. other food provision).7

The answer box has no citations, so I can't assess where that's coming from.

And here's what shows next in the search: 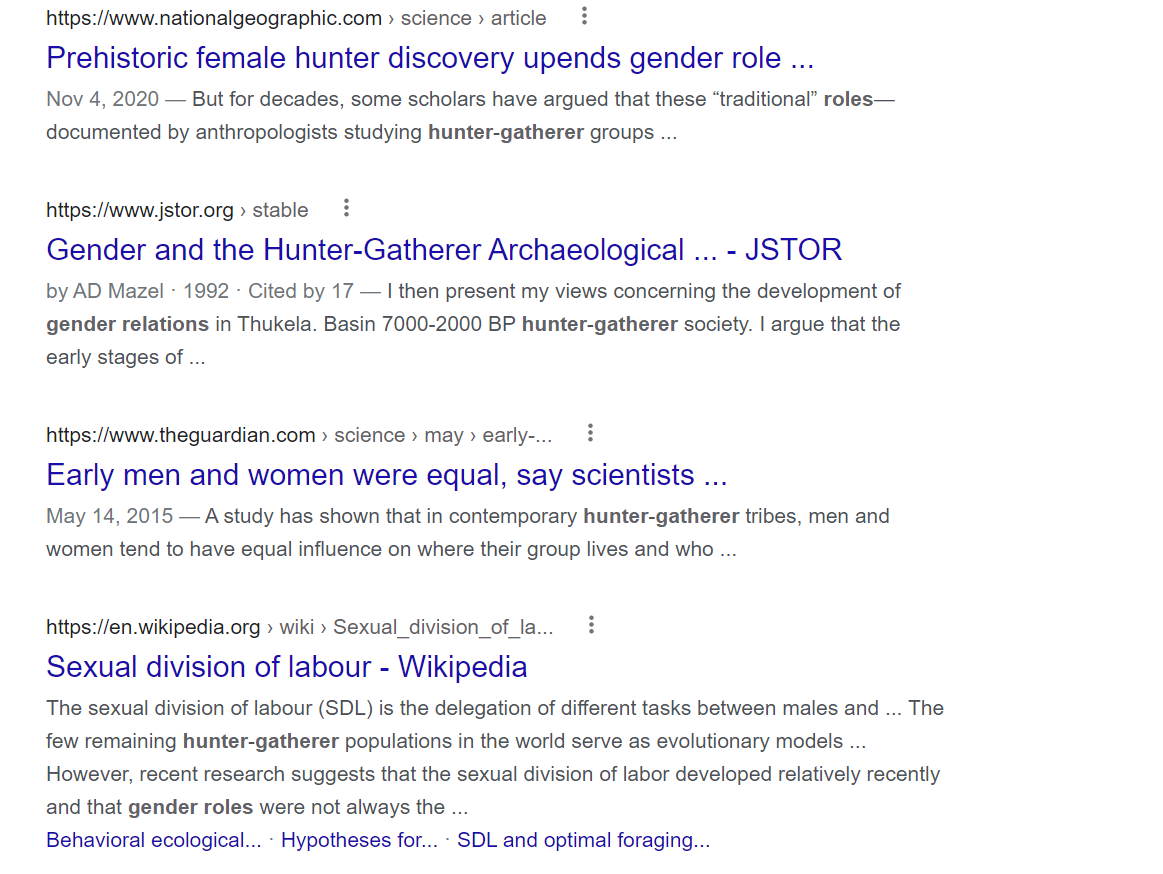 The first of these results (the National Geographic article) is essentially a summary of the same source discussed above that cites evidence of 11 females (compared to 16 males) buried with big-game hunting tools 9,000 years ago.

The next (from jstor.org) is a discussion of "gender relations in the Thukela Basin 7000-2000 BP hunter-gatherer society." The abstract states: "I argue that the early stages of this occupation were characterized by male dominance which then became the site of considerable struggle which resulted in women improving their positions and possibly attaining some form of parity with men."

The next (from theguardian.com) is a Guardian article with the headline: "Early men and women were equal, say scientists." The entire article discusses a single study:

The final result is a Wikipedia article that is mostly about the differing roles for men and women among foragers. The part that provides Google's 3rd excerpt is here (screenshotting so you can get the full experience of the citation notes):

Source 8 looks like the closest thing to a citation for the claim that "the sexual division of labor ... developed relatively recently." It goes to this paper, which seems to me to be making a significant leap from thin evidence. The basic situation, as far as I can tell, is:8

I do not think that "Neanderthals didn't eat small game or vegetables" is much of an argument that they had egalitarian division of labor by sex.

My current impression is that today's foraging/hunter-gatherer societies have disappointingly low levels of gender equality, and that this is the best evidence we have about what pre-agriculture gender relations were like.

I'm not sure why casual searching and Wikipedia seem to give such a strong impression to the contrary. It seems to me that there is a fair amount of interest in stretching thin evidence to argue that pre-agriculture societies had strong gender equality.

This might be partly be coming from a fear that if people think gender inequality is "ancient" or "natural," they might conclude that it is also "good" and not to be changed. But as I'll elaborate in future pieces, my general perspective is that the "state of nature" is bad compared to today's world, and I think one of our goals as a society should be to fight things - from sexism to disease - that have afflicted us for most of our history. I don't think it helps that cause to give stretched impressions about what that history looks like.

Next in series: Was life better in hunter-gatherer times?