For the last 200 years or so, life has been getting better for the average human in the world.

In order to answer this, one of the hardest things we need to do is get some sense of pre-agriculture quality of life.

This appears to be a topic where there is a lot of room for controversy and confusion.

My tentative position is that neither of these is quite right. I think the pre-agriculture world was noticeably worse than today's world (at least in developed countries), but probably some amount better than the world that immediately followed agriculture.

Wikipedia's entry for "hunter-gatherer" (quote in footnote1) gives a "pre-agriculture Eden" vibe, and specifically claims that:

Why might all of this be? The basic idea would be that:

To put some of my cards on the table early, I think this reasoning could be right when it comes to some problems in the modern world, but I don't tend to believe it strongly by default.

That said, I don't think either of these points is absolute. There are some ways in which nearly all modern societies differ from forager/hunter-gatherer societies, and some of these might be causing novel problems that didn't exist in our ancestral environment. So I consider the "pre-agriculture Eden" hypothesis plausible enough to be interesting and important, and I'd like to know whether the facts support it.

Evidence on different dimensions of quality of life

Below, I'll go through the best evidence I've found on the dimensions of quality of life from the table above.

For more complex topics, I mostly rely on previous more detailed posts I've made. Otherwise, I tend to rely by default on The Lifeways of Hunter-Gatherers (which I abbreviate as "Lifeways"), for reasons outlined here.

I discussed pre-agriculture gender relations at some length in a previous post. In brief:

I think it's somewhat common to find rosy pictures of pre-agriculture society, with thin and even contradictory citations. I think this is worth keeping in mind for the below sections (where I won't go into as much depth as I did for gender relations).

Pre-agriculture violence seems to be a hotly debated topic among anthropologists and archaeologists; the debates can get quite intricate and confusing, and I've spent more time than I hoped to trying to understand both sides and where they disagree.

My take as of now is that overall pre-agriculture violence was likely quite high by the standards of today's developed countries.

This was complex enough that I devoted a separate post entirely to my research and reasoning on this point. Here's the summary on "nomadic forager" societies (which are thought to be our best clue at what life was like in the very distant past) vs. today's world:

I'm going to examine both hunger and health, since both seem among the easiest ways to get at the question of whether pre-agriculture society had meaningfully higher "poverty" than today's in some sense.

The most relevant-seeming part of Lifeways is Table 3-5, which gives information on height, weight, and calorie consumption for 8 forager societies. My main observation (and see footnote for some other notes2) is that the height figures are strikingly low: 6 of the 7 listed averages for males are under 5'3", and 6 of the 7 listed averages for females are under 5'0". (Compare to 5'9" for US males and 5'3.5" for US females.)

The height figure seems important because height is often used as an indicator for early-childhood nutritional status,3 and seems to quite reliably increase with wealth at the aggregate societal level (see Our World in Data's page on height). Height seems particularly helpful here because it is relatively easy to measure in a culture-agnostic way and can even be estimated from archaeological remains.

What I've been able to find of other evidence (including archaeological evidence) about height suggests that the pre-agriculture period had average heights a bit taller than the figures above, but still short by modern standards, though this evidence seems quite limited (details in footnote).4

My bottom line is: the evidence suggests that pre-agriculture people had noticeably shorter heights than modern people, which suggests to me that their early-childhood nutrition was worse.

As for Wikipedia's claim that "Contrary to common misconception, hunter-gatherers are mostly well-fed," those who have read my previous piece on Wikipedia and hunter-gatherers might be able to guess what's coming next.

It seems to me that the best proxy for health, in terms of having very-long-run data, is early-in-life mortality (before age 1, before age 5, before age 15). I've found a number of collections of data on this, and nothing else detailed regarding health for prehistoric or foraging populations (other than one analysis that looks at full life expectancy; I will discuss this later on).

Other sources I've consulted (including archaeological sources) give an even grimmer picture, in some cases 50%+ mortality before the age of 15 (details in footnote).5

These are enormous early-in-life mortality rates compared to the modern world, where no country has a before-age-15 mortality rate over 15%, and high-income countries appear to be universally below 1% (source).

What about life expectancy after reaching age 10?

What I've found also suggests that pre-agriculture life expectancy was lower than today's at other ages, too - it isn't just a matter of early-in-life mortality.

Gurven and Kaplan 2007 (the only paper I've found that estimates pre-agriculture life expectancy, as opposed to early-in-life mortality) observes that its modeled life-expectancy-by-age curves are similar for modern foraging societies and 1751-1759 Sweden (Figure 3): 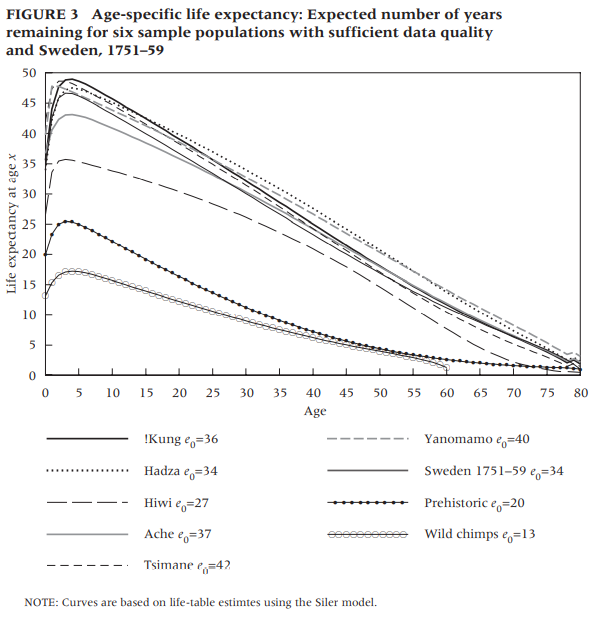 (Note also how much worse the estimate of prehistoric life expectancy looks at every age, although Gurven and Kaplan question this data.6)

As noted at Our World in Data, it appears that life expectancy conditional on surviving to age 10 has improved greatly in Sweden and other countries since ~1800 (before which point it appears to have been pretty flat).

Also see these charts, showing life expectancy at every age improving significantly in England and Wales since ~1800.

See footnote for one more data source with a similar bottom line.7

Bottom line: life expectancy looks to have been a lot worse pre-agriculture than today. I don't think violent deaths account for enough death (see previous section) to play a big role in this; disease and other health factors seem most likely.

What about diseases of affluence?

Diseases of affluence ... is a term sometimes given to selected diseases and other health conditions which are commonly thought to be a result of increasing wealth in a society ... Examples of diseases of affluence include mostly chronic non-communicable diseases (NCDs) and other physical health conditions for which personal lifestyles and societal conditions associated with economic development are believed to be an important risk factor — such as type 2 diabetes, asthma, coronary heart disease, cerebrovascular disease, peripheral vascular disease, obesity, hypertension, cancer, alcoholism, gout, and some types of allergy.

I think it's plausible that the pre-agriculture world had less of these "diseases of affluence" than the modern world (especially obesity and conditions connected to obesity, due to the seemingly much greater access to food).

I don't think it's slam-dunk clear for some of these, such as cancer and heart disease. I've dug into primary sources a little bit, and not-too-surprisingly, data quality and rigor seems to often be low. In particular, I quite distrust claims like "Someone spent __ years in ___ society and observed no cases of ____." Modern foraging societies seem to be quite small, and diagnosis could be far from straightforward.

I haven't dug in heavily on this (though I may in the future), because:

I haven't found anything that looks like systematic data on pre-agriculture mental health or subjective wellbeing. There are some suggestive Google results, but as in other cases, these don't seem well-cited. For example, as of this writing, Google's "answer box" reads:

But Thomas 2006 is this not-very-systematic-looking source.

I won't go into this topic more, because having gone through the above topics, I don't find the basic plausibility of "reliable data shows better-than-modern mental health among foraging societies" high enough to be worth a deep dive.

Update: a commenter linked to a study reporting high happiness for one hunter-gatherer society (the Hadza). My thoughts here.

I haven't gone into depth on claims that pre-agriculture societies had more leisure, and lower inequality, compared to today's.

The claims seem disputed. For example, here are excerpts on both topics from the first chapter of Lifeways:

How much do hunter-gatherers work, and why? Reexaminations of Ju/’hoansi and Australian work effort do not support Sahlins’s claim [of very low work hours] . Kristen Hawkes and James O’Connell (1981) found a major discrepancy between the Paraguayan Ache’s nearly seventy-hour work week and the Ju/’hoansi’s reportedly twelve- to nineteen-hour week. The discrepancy, they discovered, lay in Lee’s definition of work. Lee counted as work only the time spent in the bush searching for and procuring food, not the labor needed to process food resources in camp. Add in the time it takes to manufacture and maintain tools, carry water, care for children, process nuts and game, gather firewood, and clean habitations, and the Ju/’hoansi work well over a forty-hour week (Lee 1984; Isaac 1990; Kaplan 2000). In addition, one of Sahlins’s Australian datasets was generated from a foraging experiment of only a few days’ duration, performed by nine adults with no dependents. There was little incentive for these adults to forage much (and apparently they were none too keen on participating – see Altman [1984, 1987]; Bird-David [1992b]) ...

Others have found that the alleged egalitarian relations of hunter-gatherers are pervaded by inequality, if only between the young and the old and between men and women (Woodburn 1980; Hayden et al. 1986; Leacock 1978; see Chapters 8 and 9). Food is not shared equally, and women may eat less meat than do men (Speth 1990, 2010; Walker and Hewlett 1990). Archaeologists find more and more evidence of nonegalitarian hunter-gatherers in a variety of different environments (Price and Brown 1985b; Arnold 1996a; Ames 2001), most of whom lived under high population densities and stored food on a large scale. Put simply, we cannot equate foraging with egalitarianism.

Having vetted other "Eden"-like claims about pre-agriculture societies, I've developed a prior that these claims are likely to be both time-consuming to investigate and greatly exaggerated. See previous sections.

With all of that said, as I'll discuss in future posts, I do think there are signs that at least some foraging societies were noticeably more egalitarian than the societies that came after them - just not more so than today's developed world.

Next in series: Did life get better during the pre-industrial era? (Ehhhh)