This is the final piece in the Has Life Gotten Better? series.

For the last 200 years or so, life has been getting better for the average human in the world.

This post will focus on the period between ~10,000 BCE (when agriculture began) and ~1800 (when the Industrial Revolution led to rapid and clear improvements, discussed previously). This period is the only one I haven't covered so far in the Has Life Gotten Better? series. 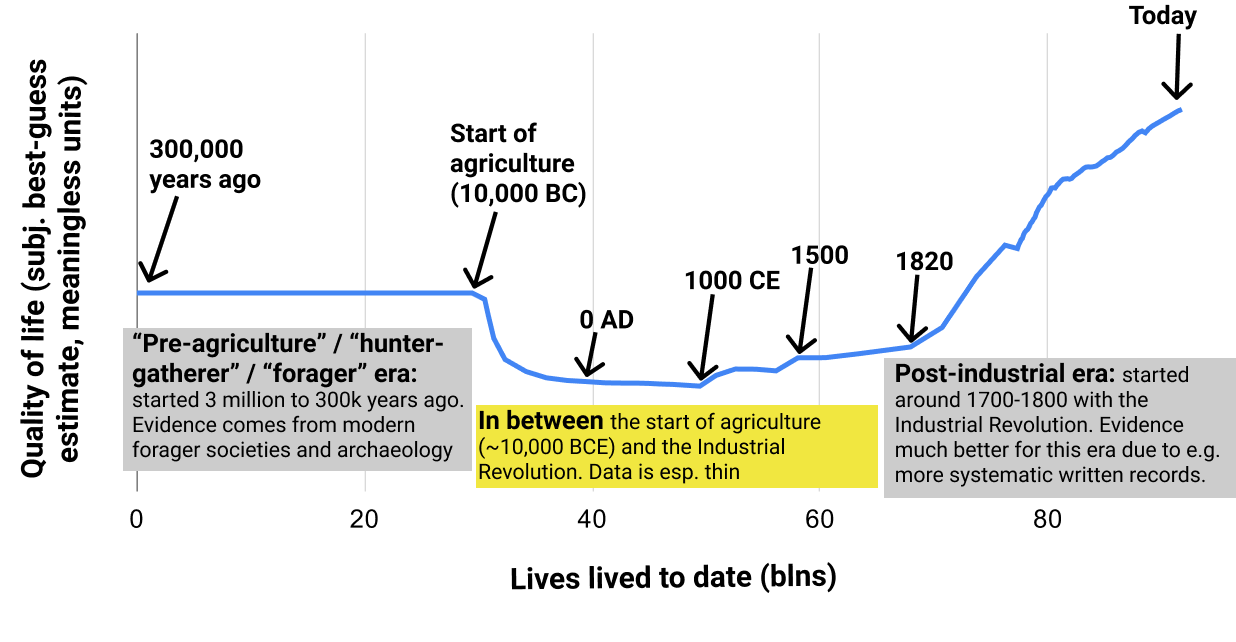 I will split this long stretch of time into three periods:

The "Neolithic Revolution" refers to when agriculture started drastically changing lifestyles, and leading to what we tend to think of as "civilization," around 10,000 BCE. Agriculture roughly means living off of domesticated plants and livestock, allowing a large population to live in one area indefinitely rather than needing to move as it runs low on resources.

I think we have some good reasons to think that this transition made life worse for the average person.

As discussed in a supplemental post, the literature on "hunter-gatherer" societies (often studied to figure out what pre-agriculture life was like) tends to emphasize the distinction between two basic types of hunter-gatherer societies (though this is a simplification1):

Below, I'll give some reasons to believe that:

This is a view that many seem to hold, and is echoed in the main source I've used on forager lifestyles ("Lifeways of Hunter-Gatherers").4 The implication here is that if you go back far enough, all or nearly all people were nomadic/egalitarian.

I have also seen this view disputed, by Better Angels of our Nature as well as one of its key sources (quotes in footnote5). I interpret these sources as guessing something closer to "50% of people in the distant past were nomadic/egalitarian."

I haven't been able to find systematic examinations of what percentage of people were egalitarian/nomadic vs. nonegalitarian/sedentary in the distant past, and I mostly don't expect to, since it seems hard to determine from archaeology. But my best guess (from above) is that it was something in the range of 50-100% of people.

And I think it must have changed either following or sometime before the Neolithic Revolution, which is when agriculture (which allows people to make far more food, far more sustainably, in a single location) started spreading across the world. I'd guess that essentially all agriculture-based societies in premodern times had characteristics more like sedentary/nonegalitarian societies;6 furthermore, agriculture is generally believed to engender much faster population growth (and population estimates accelerated greatly following the Neolithic Revolution).7

Pros and cons of this transition

As discussed in a supplemental post, it's hard to make definitive statements about nomadic vs. sedentary societies, or agricultural vs. non-agricultural societies, because (from what I've seen) they are not clearly and systematically distinguished in studies (on life expectancy, violence, and other things relevant to quality of life).

So here I am largely going off of impressions from reading the literature, particularly the debates on violence (where people tend to imply that nomadic/egalitarian societies are less violent than sedentary/nonegalitarian ones) and Lifeways (which has a lot of systematic analysis and nuanced discussions throughout, making me generally put a fair amount of weight on its claims). From what I can tell, the claims I'm about to make would be shared by most scholars in the relevant field (though I'm certainly not confident of this and would love to be corrected by any readers who know the field well).

Cons. The main things that jump out at me are:

Pros. I haven't been able to identify any clear ways in which this transition had much immediate benefit for the average person (although it does seem to have led to a lot more people).

Mystery period: between the rise of agriculture and the 1300-1800 period

Nearly all of the data we have seems to be either about extremely early humans (pre-agriculture or at least pre-state) or about the relatively recent past (1300 CE and later).

My rough understanding of why this is:

Some of the few observations I've been able to make:

Infant and child mortality look pretty flat starting around 400 BCE. From Our World in Data: 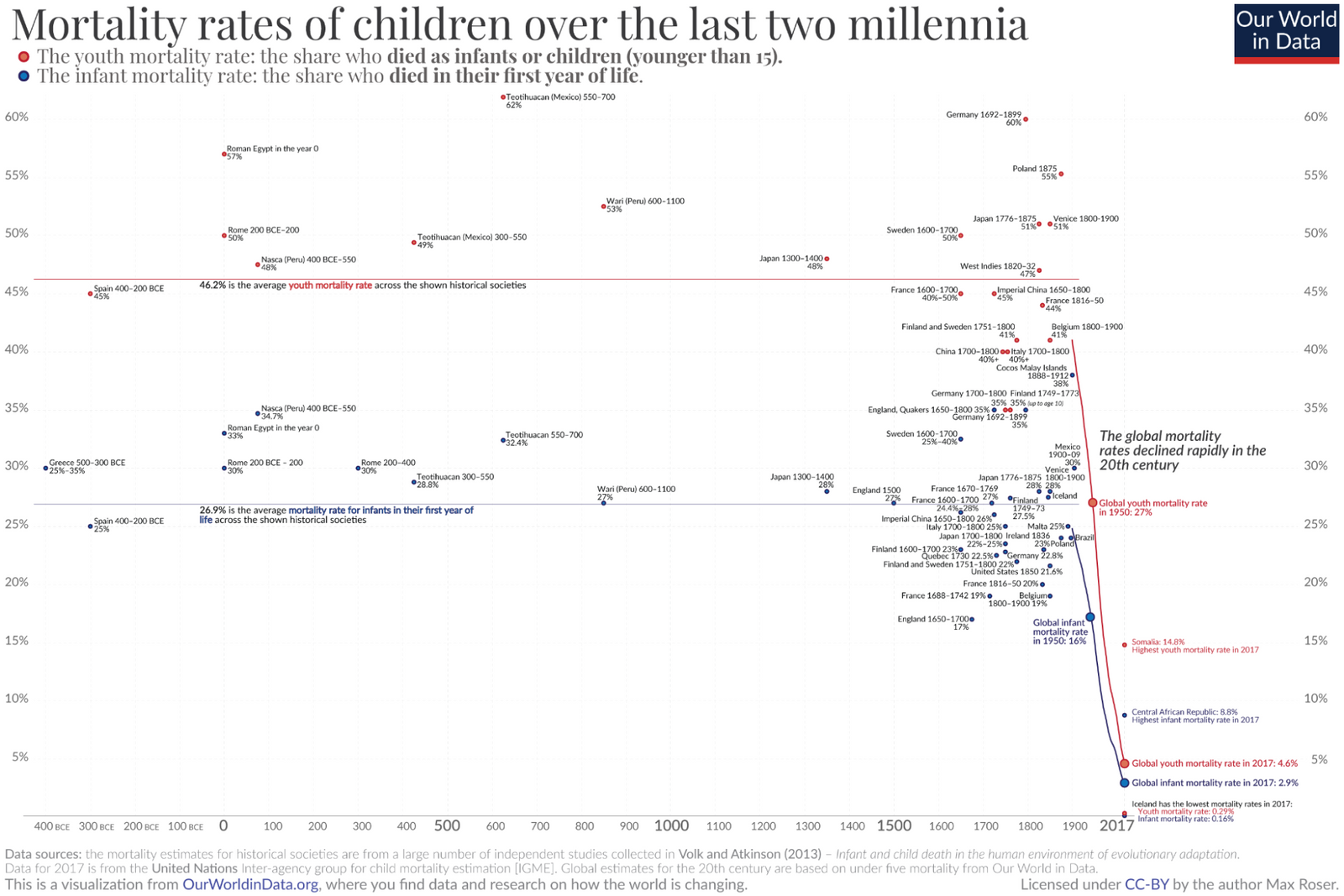 Height looks flat in Europe starting around the year zero. Again from Our World in Data: 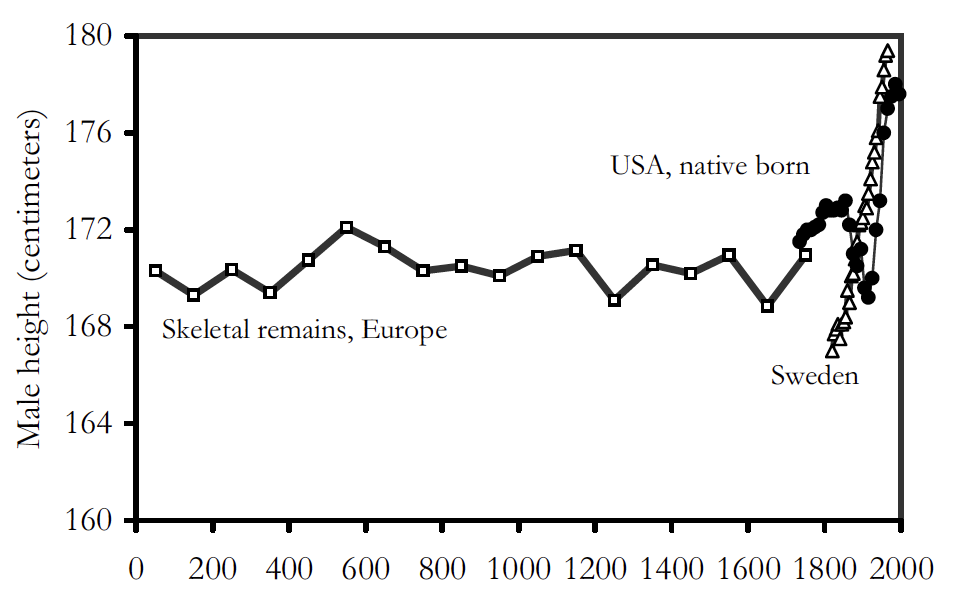 Life expectancy trends are unclear, as noted in the previous section (in particular, see the part about ancient Rome).14

Trends in violent death rates are unclear, and again we lack evidence that there was improvement before the 1300-1800 period (see supplemental post on this).

My qualitative history summary doesn't reveal any clear trends in quality of life - in particular, no clear pattern of rising or falling slavery,15 institutionalized discrimination or gender equality.

"Empowerment" and material incomes seem to have risen sometime between the Neolithic Revolution and ~0 CE, but not risen further for ~1000 years after that. This is what's implied by standard per-capita GDP data,16 and Ian Morris argues this case at length in The Measure of Civilization (key quotes in footnote).17 That is: people had "rising incomes" in some meaningful sense. I've found it hard to pin down exactly in what sense incomes were rising,18 but it appears that a lot of it came down to things like larger buildings; more sophisticated building materials, ornaments and tools; and perhaps richer diets (though it naively looks to me like hunter-gatherer societies have higher meat consumption than most ancient Romans,19 and Morris expresses some skepticism that food consumption was increasing or improving).20

1300 is the earliest year I've seen on the x-axis of a chart, using systematically collected historical data, that seems clearly relevant to quality of life:

And around 1600, we have similar charts for the US (from Better Angels of our Nature): 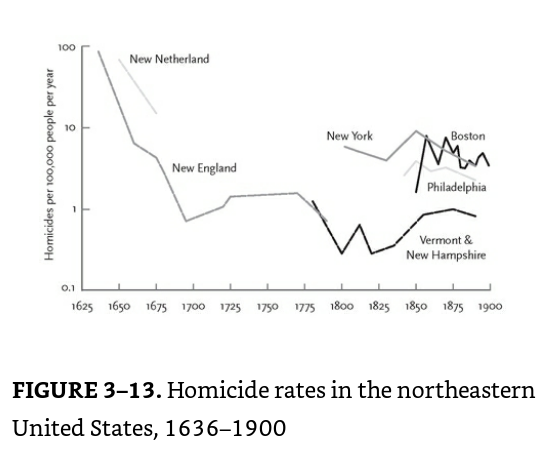 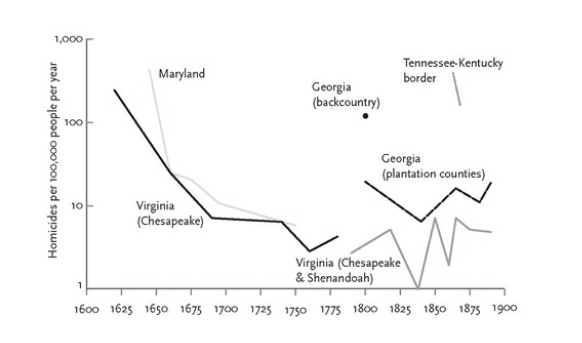 I've argued in a supplemental post that the starting homicide rates in these charts aren't necessarily lower than before the Neolithic Revolution. But they seem to fall precipitously as soon as the charts begin. I'm guessing there is some common factor between "recording homicides well enough that a chart like this is possible" and "taking measures to reduce them." And I consider this some sort of good sign about how culture was evolving, even if violent death rates didn't necessarily fall when large-scale atrocities are included.

The 17th century also saw a wave of torture bans: 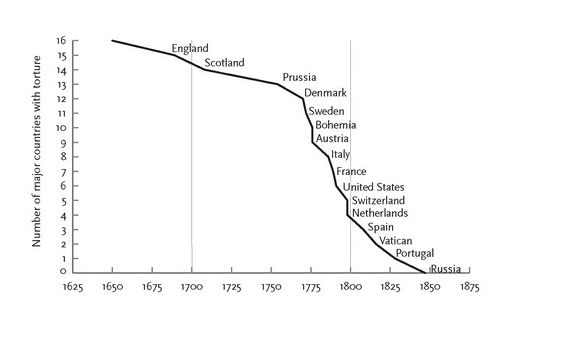 With these points in mind, I'd guess that this is also the period that saw most of whatever improvements in violent death rates, height (as a proxy for hunger) and life expectancy happened before the Industrial Revolution. But that is of course just a guess.