Adapted from an old GiveWell blog post, which has more detail.

The Better Angels of our Nature argues that “violence has declined over long stretches of time, and today we may be living in the most peaceable era in our species’ existence … it is an unmistakable development, visible on scales from millennia to years, from the waging of wars to the spanking of children.”

The book gives many examples of ways in which violence has declined. It looks at trends in homicides, in executions, in bans on slavery and torture, in corporal punishment at school, in hunting, even in apologies by political and religious leaders.

What it doesn't provide is a systematic, long-run examination of trends in violence: a single, consistent set of key indicators reported in the same way and tracked over long time periods (in particular, going back further than a few hundred years). Without this, it's hard to know whether "violence has declined" is a consistent, across-the-board phenomenon, or just a description of the particular measures and time periods that the book chooses to focus on.

And my best attempt to look at a single systematic indicator (the violent death rate) presents a muddier picture about long-run trends in violence, because it's plausible (though not clear) that the increasing severity, over time, of the largest wars and atrocities has been big enough to mostly (if not entirely) offset a lot of the improvements on everyday (and other) dimensions of violence.

In my view, the single best indicator for long-run trends in violence is the violent death rate: how many total deaths from violence there were, per person (or per 100,000 people), per year. Deaths tend to be easier to verify and measure than most other relevant indicators, and to the extent that Better Angels discusses very long time frames, it is mostly discussing some measure of violent deaths. But the way it presents these is, in my opinion, easy to get confused by:

In my view, this means there's a "missing piece" of the story of trends in violence: we see that one kind of violent death has become less common over the last several hundred years, but we don't see the trend in all kinds of violent deaths. And I consider this missing piece significant, because my sense is that wars and atrocities account for far more violent deaths than most of the other sources of violence the book discusses.

For example - and this surprised me - the global rate of violent deaths from the 20th century's “big four” atrocities alone (two World Wars, regimes of Josef Stalin and Mao Zedong) – spread out over the entire 20th century – is ~50 violent deaths per 100,000 people per year; that’s comparable to the very worst national homicide rates seen today, whereas the homicide rate for high-income countries such as the U.S. tends to be less than 1/10 as high.

In other words, the two World Wars + Stalin and Mao alone were enough to make the 20th century as a whole more dangerous than homicide makes today’s homicide-heaviest countries, and they were enough to offset the benefit of the European homicide rate decline that Better Angels describes from Medieval times through the Enlightenment.

Deaths from wars and atrocities, by century

I did this analysis a few years ago, so it's possible that it doesn't incorporate some corrections to the data source I'm using.

I believe the main source that Better Angels uses to tabulate the death tolls of the biggest wars and atrocities is Atrocities: The 100 Deadliest Episodes in Human History by Matthew White. (A bit more discussion of why I used this source in this post.) So I pulled the numbers from its "one hundred deadliest multicides [wars and atrocities]" table (pg 529).

I used these numbers to create estimates of the death toll from wars and atrocities each century, per 100k people per year.1 Here's the result (calculations here):

There's no clear trend in the death rate from wars and atrocities from the 13th century to the 20th. The jumpiness of the totals makes it very hard to see any sort of trend, even when aggregating 100-year periods; one every-few-centuries giant atrocity tends to account for a huge chunk of the bad centuries’ death tolls.

The figures are noticeably lower before the 13th century (which is strikingly close to when we have our first documented evidence of declining homicides).

This could be misleading: as both Better Angels and Atrocities point out, the farther back in time one looks, the more likely it is that there are lots of undocumented atrocities, and thus that the numbers above are underestimates.

On the other hand, I somewhat doubt that any of the undocumented atrocities are big enough to really stack up with the biggest atrocities in this table: as shown above, for any given century there is a very steep dropoff from the 1-3 most damaging currently known atrocities to the rest. So if earlier centuries had comparable war/atrocity death tolls, they probably came from much larger numbers of smaller wars and atrocities.

There is a lot of uncertainty in these figures, and revisions could change the picture quite a bit.

What happens when we account for both atrocity+war deaths and homicides? It's very hard to say, because the only homicide rate data I've found (see here) is from (a) a few European countries starting in the 1300s; (b) the USA starting in the 1600s.

But I wanted to get a sense of the rough ballpark, so I threw together an estimate of the global homicide rate (assumptions I made are in this footnote4). Here's the result (spreadsheet here): 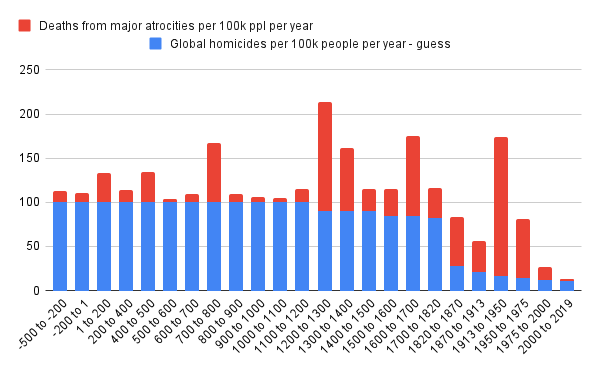 Here's an alternative version, in which I assume that homicides fell worldwide the same way they fell in Europe: 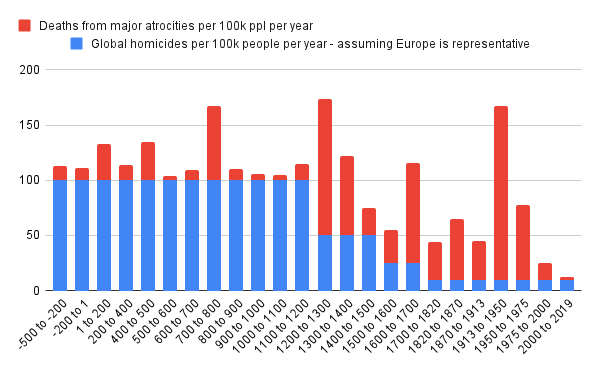 This is all very imprecise, because global homicide rates are a mystery before very recently. But the big picture is that the rise in death tolls from huge wars and atrocities plausibly offset the decline in homicide rates, leading to a flat or unclear trend in overall violent death rates between ~500 BCE until the Industrial Revolution (~1700s), or even later.

Since the mid-20th century, deaths from wars and atrocities have been much lower - though it's hard to make too much of this, because in general, wars and atrocities seem very volatile, with massive death tolls sometimes occurring after centuries of relative peace. Furthermore, as argued in Toby Ord's book The Precipice, there's a case to be made that today represents an all-time high in terms of risks that could decimate a significant fraction (or even all) of humanity. So maybe rather than declining violence, what we're seeing is a continued trend of more and more infrequent risks of larger and larger catastrophes.